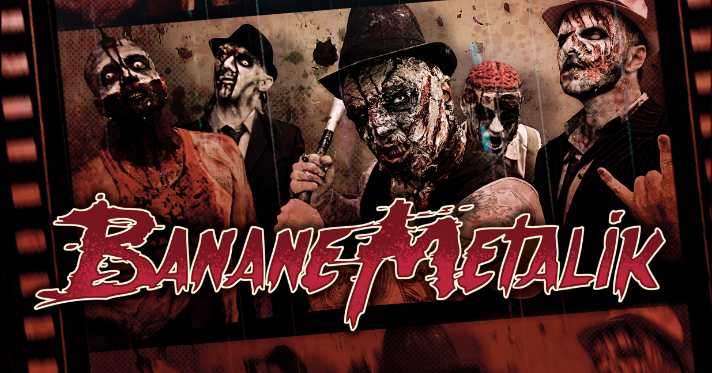 It is with great delight that we welcome the kings of Gore ‘N ‘Roll, the one and only, Banane Metalik to Devil Rats Records !

BANANE METALIK has baptised its music Gore’ n’ Roll and describes it as a mix of cinematographic and musical culture. Through its extensive worldwide touring, the band became renowned for their unique universe and the energy unleashed during their live shows. With their discography, the band has gradually gained in popularity, and has now positioned itself as a pioneering force in the European Rock n’roll scene.

BANANE METALIK has signed a pact with the Devil Rats to release their latest opus « The Gorefather » on vinyl and to reissue their entire discography on CD & vinyl format.

"The Gorefather", 6-tracks MLP will be released internationally (Europe, USA, Canada, Japan, Mexico...) in September 2015. The band will also kick off their european tour “Sangre Familia” with 45 dates in 10 countries. Although the band's live performances have contributed to their wild and successful reputation, these new songs are an exhilarating tribute to their musical background. It is the artistic testimony of an outstanding band: a high class rock’n’roll soundtrack with a solid dose of sulphur !

More news will follow shortly, and bear in mind that this is happening sooner than you think !

Until then, you can already pre order the limited Gatefold vinyl edition of « The Gorefather » right here :